Both the Leggatt side of the family (Alf) and Moule Martin (Joan) have relations that have become famous people. Many stories have been passed down over the years, some documented more than others. It has only been in recent years and having the use of the internet that more information has been revealed. The most documented being Edward Leggatt, a scientist by trade who turned out some great inventions and lived to become a Millionaire.

Uncle Ted was an inventor with great entrepreneurial skills who started his first company in 1921 in London’s East End. Ted has little interest in darts. His product was modelling clay, specifically a formula he invented which, unlike that of his major competitor had no odour, hence the company name. More about this Dartboard story can be read in Dr. Darts’ Newsletter. Found on the internet, a well documented history of how the company formed. To read the PDF click here

His first business in the East End led to him marrying Auntie Millie and moving to the Bahamas when he became a millionaire. Uncle Ted was a very generous man and helped many people throughout his life. He set up the first Taxi service on the Island and provided bursary’s every year for disadvantaged students to attend university. He would come and stay with Alf and Joan and their Family home at The Old Rectory. Each visit he would take Joan and the children to Ricemans, a department store in Canterbury, where he would by each child a new outfit, choosing whatever they wanted. Other inventions included one of the first electric blankets, although it has been difficult to find any documentation relating to this. Uncle Ted passed away in the late 1960’s his wife Millie moved from the Bahamas to South Africa, where she lived with her Daughter.

More information regarding the Dartboard (Taken from Wikipedia)
Nodor was started in 1919 by chemist Ted Leggatt as a manufacturer of modelling clay. In 1923, Leggatt produced his first dartboard which was made from clay. It did not prove popular, and within a year Nodor was making elm dart boards. By the mid-1930s, however, Nodor had found success with the launch of their patented bristle dartboard.[2]
As soon as Nodor’s patent has expired, Winmau began to produce bristle boards, and an intense rivalry between the two companies began. Each company made several bids to acquire the other, before Nodor finally completed a takeover of Winmau in 2002.[2]
Nodor continues to manufacture darts equipment using both brand names. The Winmau brand has maintained its close links with the BDO, both as title sponsor for the Winmau World Masters and continuing to be the official board supplier for major tournaments such as The Lakeside World Championship
Research has shown the History of the Dartboard and evidence of Uncle Ted’s invention is highlighted  here

History of the Dartboard can be read here

Sir Hugh Leggatt (whos obituary can be read here in the Times) was a cousin to Edward Leggatt Senior. It was written that Hugh’s father Henry, had entertained Queen Mary in their own home. Henry was a fourth generation of art dealers and ran a family firm of the Leggatt Brothers. Hugh Leggatt was knighted in 1988 for his work for the Museums and Galleries Commission. Four years later he closed Leggatt Brothers (after 172 years of trading). In retirement he became increasingly focused on acquiring — and retaining — great works for the nation’s galleries and in making them accessible to the public for free and in perpetuity.

For more information look at the family heraldry here.

Sir Hugh Leggatt - his father, Henry, was a fourth generation art dealer in the family firm of Leggatt Brothers, a gallery in Jermyn Street with origins rooted in Regency London.

William Thomas Wells, better known as Bombadier Billy Wells was British and British Empire Heavyweight Champion from 1911 -1999 defending the British title a record 14 times. In 1911 ne became the first heavyweight to win the Lonsdale Belt, which had been introduced for British champions at all weights in 1009. Wells, who stood 6ft 3 in tall and at his heaviest was 192 Ibs, had joined the Royal Artillery as a gunner. Posted to Rawaloindi, he thrived in the army boxing matches. He bought himself out of the Army in 1910 and pursued a professional career in an era when the sport was immensely popular.

Billy was related on Alf Leggatt’s side of the family. Edward Leggatt’s mother Polly, had a sister Emily who married William Thomas Wells (Billy’s Father). Click here for family heraldry.

The trademark of a musclebound man banging a gong at the beginning of every Rank film was dreamed up in the 1930s by the publicity manageress of General Film Distributors, which then distributed J Arthur’s films. The lady had in mind Bombadier Billy Wells, “Beautiful Billy”to his fans, who had been British heavyweight boxing champion from 1911-19. He was filmed at Walton Hall Studios, Isleworth, in 1935. After the war, it was deemed that Wells should be replaced and his successor was hunky Phil Nieman, who was immortalised at Gainsborough Studios, Shepherd’s Bush. Nieman’s replacement, in 1955, was yet another athlete, Ken Richmond, who won a wrestling bronze in the 1952 Helsinki Olympics. Richmond, filmed at Pinewood, remains to this day. Incidentally, the gong is actually made of plaster and paper and the noise we hear, the reverberations of a Chinese tam-tam (three feet diameter), is recorded by percussionist James Blades.

The trademark of a musclebound man banging a gong at the beginning of every Rank film was dreamed up in the 1930s by the publicity manageress of General Film Distributors, which then distributed J Arthur's films.

Vanessa Lee was born as Winifred Ruby Moule in June 18th 1920 in Streatham. She was a relative on Joan Martin’s side. Joan Martin’s father being Alfred Moule-Martin.

Vanessa was possibly better known for her appearances in Ivor Novello’s musicals in the immediate post-war years as well as appearing occasionally on television. During her career she had a little cosmetic surgery on her nose that enabled her to breath more easily. Her partnership with contralto Olive Gilbert in Novello’s hit shows was legendary. Her husband inherited an Irish peerage, when he became the 8th Baron Graves, but continued to act as Peter Graves.

(1949) She acted in Ivor Novello’s musical, “King’s Rhapsody”, at the Palace Theatre in Manchester, England with Ivor Novello, Zena Dare, Phyllis Dare and Olive Gilbert in the cast. (1954) She acted in Noël Coward’s musical, “After the Ball”, at the Globe Theatre in London, England with Peter Graves, Mary Ellis and Graham Payn in the cast. Robert Helpmann was the director.

Vanessa’s obituary comments on her life as a renown actress, dancer and singer. During the second world war she contributed to the immensely popular wireless show Bandwaggon and appeared in large scale productions  and touring all over the world.

But Vanessa Lee was never keen on long stage runs and after the final performance of “Who Killed Santa Clause” in 1972 she finished her career. 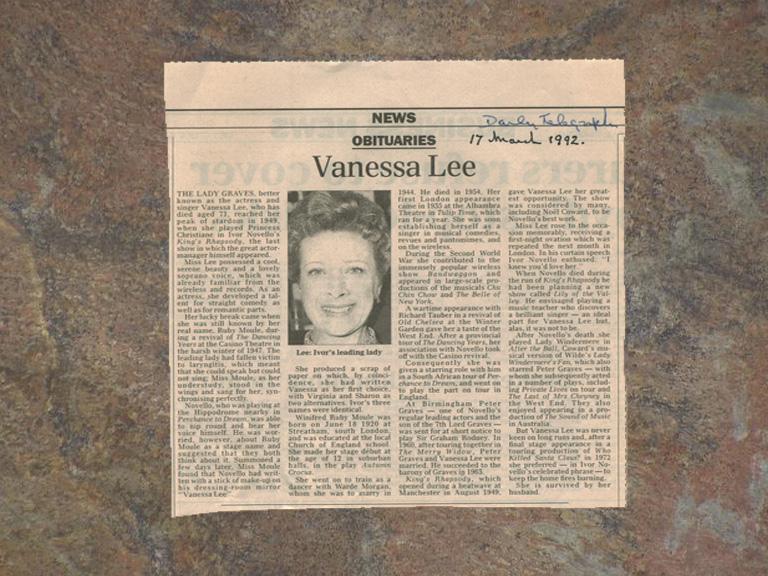 In Memory of those who died on the R101 Air Ship

This commemorative card was given to the relatives of the people who died in the maiden voyage of the Giant Airship R101, which left Cardington at 7pm on Saturday, for India, crashed on a hill near Beauvais, France at 2.5 am and 48 of those on board -including Lord Thomson, Minister fro Air and Air Vice-Marshal Sir Sefton Brancker – were burned to death. Amongst those men who also died was W Moule, father of Lieut. Alfred Moule Martin RN and who’s Granddaughter  was Joan Martin. This card has been passed down through the family. Pictured below, the scanned copy shows the names of those who died.